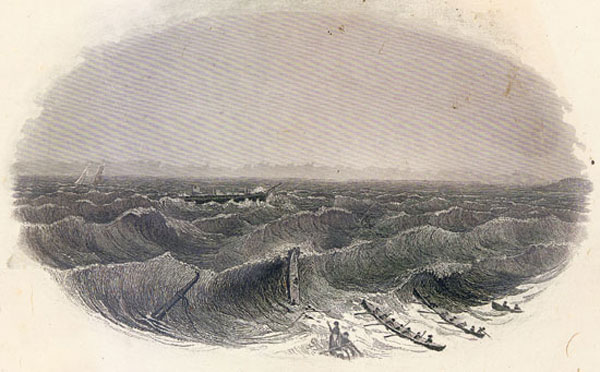 Sent to explore the Pacific Northwest coast as part of the United States Exploring Expedition, the USS Peacock wrecked at the mouth of the Columbia River on July 18, 1841.

The Peacock, having sailed from the Hawaii, approached the Columbia River on the morning of July 17, 1841. A dense fog lasted until early morning on the eighteenth, when the crew spotted Cape Disappointment on the northern side of the river’s mouth. Soon after noon, the ship’s captain, Lieutenant Hudson, called all hands to work ship into the river (Untold Story of the Peacock Wrecked in 1841, by Norman A. Howerton in the Oregon Historical Quarterly Vol. 43, No. 2 (Jun., 1942), pp. 129-134). Following directions through the channel he’d been given in Hawaii, Lieutenant Hudson brought the ship to bear northeast one-quarter east by compass, and was toward the cap to bring Chinook Point to bear east, northeast.

In a few minutes Lieutenant Hudson discovered the sea breaking ahead, and, believing the Peacock too far to the southward, he wore ship and ran a short distance until clear of the breakers, and to where the passage appeared smooth and clear of break, both from below and aloft.

Again the Peacock stood in. Then she struck.

By the morning of the 19th, it became clear the ship could not be saved and the captain ordered the crew evacuate. American missionaries at Point Adams and Hudson’s Bay Company officials at Fort George (now Astoria) provided aid. Not one member of the crew perished.