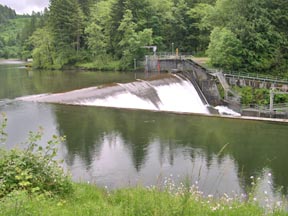 The Marmot Damn on the Sandy River was built in 1913 as part of the Bull Run Hydroelectric Project.

After almost a century of service, Portland General Electric, federal and state agencies, and conservations groups settled on a plan to remove both the Marmot Dam and the Little Sandy Dam. Rising operating costs and continued environmental considerations provided the motivation.

After years of planning, Portland General Electric’s CEO, Peggy Fowler, brought down the plunger on July 24, 2007 and the first explosives blasted holes in 68 different spots on the dam.

Heavy equipment and the Sandy River did the rest (watch the video for the most excited hydrologists you’ve ever seen!):