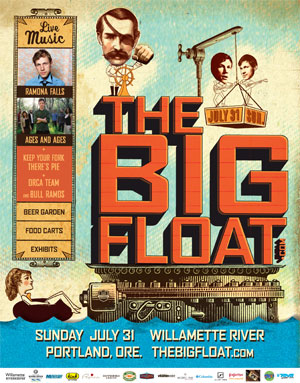 The Big Float takes place Sunday, July 31, 2011 – in and on the banks of the the Willamette River in Downtown Portland. This first annual event aims to celebrate our river – highlighting the recreation it offers as well as the restoration it has undergone in recent years.

Despite what you may have heard, the Willamette River is safe to swim in (just, sometimes, not right after heavy rains, when a Combined Sewer Overflow may occur – an event that will become even more scarce when the Big Pipe project is complete).

People of all ages (1,000+ participants anticipated, registration will be cut off at 2,000) will enjoy a one-hour river cruise down the Willamette in the “float-worthy apparatus” of their choice, collecting at the east bank of the Hawthorne Bridge, parading west across the Hawthorne, due south on the Esplanade to final disembarking at the west bank beach of the Marquam Bridge. Floaters will head northeast to cross the river and “take out” at the starting point of the parade, at the east bank of the Hawthorne Bridge.

The Big Float is open to all – a $5 donation is suggested per floater. Proceeds go to Willamette Riverkeeper, a non-profit organization dedicated to protecting and restoring the Willamette River.

Things kick off Sunday morning at 9:30am in the parking lot at 1515 SE Water Ave, at the southeast base of the Hawthorne Bridge (you can register online now). At 11am the Inner-Tube Parade begins, led by the Last Regiment of Syncopated Drummers, across the Hawthorne Bridge, along the west side esplanade, to the Marquam Bridge Beach (where late arrivals can sync up with the float!). Tubing begins at 11:30, followed by the after-float pool party and then from noon until 6:30pm the After Float Party – with food carts, exhibits, live music, and a beer garden (open to non-floaters too, for $7).

And so it was that on Sunday, July 31, 2011, a large armada of floaters in tubes, rafts, kayaks and other human-powered water vessels gallantly set sail across the mighty Willamette River. It was the inaugural launching of THE BIG FLOAT.