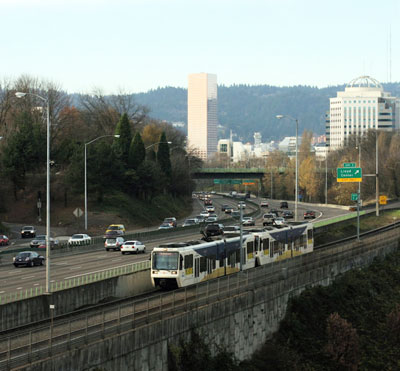 MAX, an acronym for Metropolitan Area eXpress, was announced by TriMet on July 25, 1986 as the name selected for the Banfield Light Rail Project trains. MAX’s first line, from Gresham to downtown, officially opened on September 5 of that same year.

In 1985 TriMet set up a contest for employees to suggest names, with the public voting on a list of finalists. Jeff Frane, a typesetter at TriMet at the time, suggested the name MAX, which was inspired by his son Alex.

“I used to read him these picture books and there was a character – I think he’s a rabbit – his name was Max,” Frane says. “The ad agency had a list of criteria. The name had to be simple, had to be friendly. I was playing around with acronyms. Max just seemed like a really friendly name.”

For suggesting the winning name Frane won the cash equivalent of an annual pass. Tri-county residents got a friendly sounding train name!