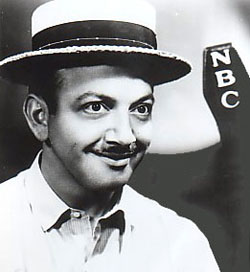 Mel Blanc, the man of a thousand voices, grew up in Portland, Oregon. The Lincoln High School grad began his showbiz career in 1927 on the KGW program The Hoot Owls.  He later worked for KEX producing and hosting Cobwebs And Nuts, before making his way to Hollywood in 1935 where his famous association with Warner Bros. began.

He began voicing Porky Pig and debuted Daffy Duck in the 1937 short Porky’s Duck Hunt. Other voices for which he earned fame include Foghorn Leghorn, Yosemite Sam, Tweety Bird, Pepe le Pew, and Sylvester the Cat. Blanc was also the original voice of Woody Woodpecker, though due to contractual issues he had to give up that gig.

Bugs Bunny, however, is the most famous Mel Blanc voiced character. Elements of Bugs were found in earlier Happy Rabbit cartoons, but A Wild Hare, largely considered the first official Bugs Bunny cartoon, was released on July 27, 1940.