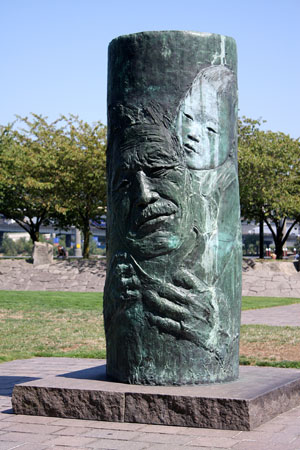 Portland’s Japanese American Historical Plaza was dedicated on August 3, 1990. More than a thousand people attended the dedication, including many Japanese-Americans with family who were interned during World War II (The Oregonian, 4-August-1990).

Landscape architect Robert Murase, who at age 4 was interned with his family, worked for a quarter century to establish the monument. Finally, with the help of Portland real estate magnate Bill Naito and others who donated money for and worked on the project, the Japanese-American Historical Plaza was dedicated.

Randy Gragg described the project in The Oregonian on August 5, 1990:

The effort was clearly worth the trouble. Besides being the first memorial to Japanese internment in the country, the plaza has all the markings of becoming Portland’s most nationally important and enduring monument.

If memorials are created in part to heal, few things can serve the purpose better than to erect a monument to the mistake that caused the ill. Maya Lin proved this with her design for the Vietnam War Memorial in Washington, D.C.

Breaking the tradition of figurative sculptures memorializing war heroes and battles, she instead gave the country an experience to have. Visiting her memorial leaves you with an impression — a deep, unforgettable feeling — rather than an easy image.

Murase has attempted something similar. The Willamette River allowed him to base his plaza on the oldest traditions of Japanese garden design in which a creek or river is always located to the east. And, being north of Burnside Street, the plaza is across the street from what was a bustling Japanese community before internment effectively erased it.

Murase has fused these features. The plaza will function as a public gathering spot, a pleasant path to stroll, a history lesson and a memory of a community that once was.

Four months after Pearl Harbor, more than 100,000 people, guilty of nothing except being of Japanese descent, were rounded up on the West Coast. They were jailed without probable cause, much less charges or trials. In 1988 Congress passed legislation apologizing on behalf of the government. Eventually $1.6 billion in reparations were paid to internees and their heirs.