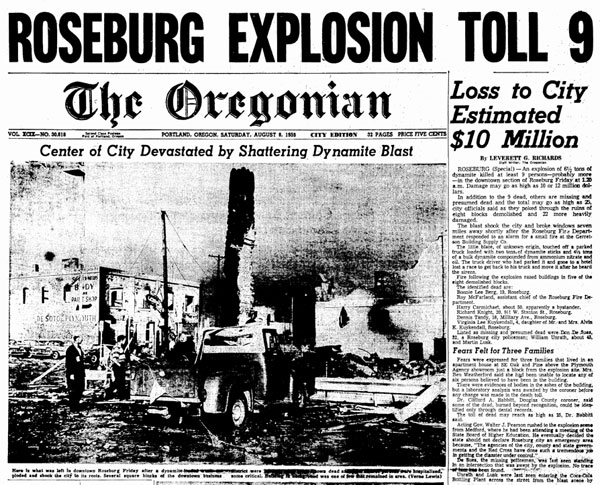 On August 7, 1959 at 1:14am eight city blocks in downtown Roseburg, Oregon were leveled by the explosion of a truck containing 6.5 tons of explosives.

Truck driver George Rutherford had arrived in town the night before and arranged to deliver the load the next morning. He parked the truck next to the Garretsen Building Supply Company near the corner of Oak and Pine Streets and checked into the Umpqua Hotel for the night.

Unfortunately during the night the Garretsen building caught fire – and detonated the truck.

The explosion blew a hole in the ground 50 feet wide and 20 feet deep, the resulting mushroom cloud was mistaken for a nuclear explosion by some onlookers. The explosion also sparked a massive fire.

Ultimately fourteen people were killed, 125 injured, and over 100 building were destroyed or damaged. Windows nine miles from the blast were shattered.

More on the Roseburg Blast: