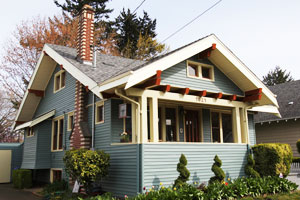 Craftsman Style and the Great Boom — Building Portland’s Classic Arts and Crafts Neighborhoods in the Early 20th Century, the latest installment of the Stumptown Stories series, will be presented at the Jack London Bar (basement of the Rialto, SW 4th and Alder) on Tuesday, August 9, 2011 at 7:30pm.

Portland’s population and wealth exploded in the years immediately after the Lewis and Clark Exposition of 1905, and the style-conscious citizens turned to local architects to bring “modern” ideas to life in the new streetcar neighborhoods sprawling out from downtown. Some, like Emil Schacht and Joseph Jacobberger quickly turned from their established Portland Victorian roots to Craftsman and Arts & Crafts styles. But they were quickly joined by newcomers familiar with Eastern architectural trends, like Ellis Lawrence from Boston, Alfred Faber from Philadelphia, and John Bennes from Chicago. Architectural historian Jim Heuer will share results of extensive research he and his partner Robert Mercer have developed on these and other talented designers of the period and what influences shaped their residential architecture in the boom years from 1904 to 1914. The results of these creative architects’ work can be seen in the rich trove of surviving Arts & Crafts era homes in the neighborhoods of Irvington, Piedmont, Willamette Heights, Laurelhurst, and Ladd’s Addition. Mr. Heuer’s lecture will be illustrated with his collection of both historic and modern photographs of these homes and their interiors.