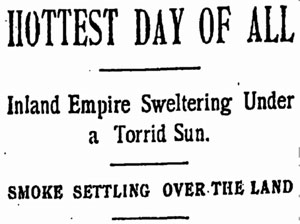 A heat wave hit the Northwest’s Inland Empire and Northeastern Oregon during the summer of 1898. The all-time record high was surpassed by 5 degrees in Walla Walla, Washington, when the thermometer reached 113. But the hottest spot on August 10, 1898 was Pendleton, Oregon, where the thermometer topped out at 119 degrees Fahrenheit (Morning Oregonian, 11-August-1898).

PENDLETON, Or., Aug. 10. – Today was the hottest in the history of Pendleton. At 11 o’clock the thermometer stood at 111 degrees. In the afternoon it reached 119 degrees at the the voluntary observer’s office. Other thermometers about town read from 114 to 123 degrees. Some attribute 2 or 3 degrees of the heat to the fires in the wheat fields four miles east of the city.

The woolen mills shut down in the middle of the afternoon on account of the heat. There were no prostrations in the city, but a number of horses and men were overcome in the wheat fields.