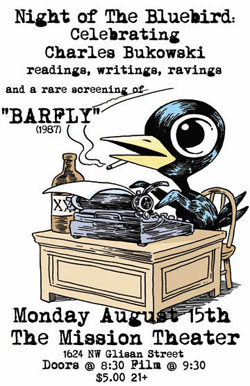 Celebrate the late Charles Bukowski‘s 91st birthday with a night of readings and writings by local luminaries, rare Bukowski footage, and a one night only screening of Barfly at the Mission Theater (1624 NW Glisan) on Monday, August 15, 2011 (actually the day before Buk’s birthday). Night of the Bluebird: Celebrating Charles Bukowski – readings, writings, ravings is presented by The First Rule of Book Club.

Known as “The Laureate of the American Lowlife” Bukowski drew from his personal experience. His thousands of poems and hundreds of stories call on a unique lexicon of lower class life to capture stories of love, life and dead end jobs – all punctuated with broken bottles and broken hearts.