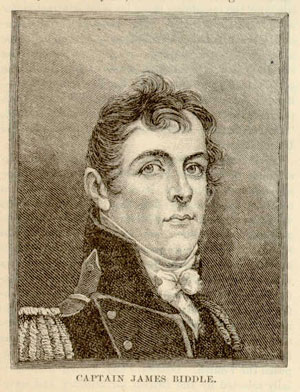 Under orders to to proceed to the Columbia River, with a view to assert on the part of the United States the claim to the sovereignty, by some symbolical or appropriate mode adapted to the occasion, Captain James Biddle anchored at the mouth of the river on August 19, 1818 in the warship Ontario (An Event of One Hundred Years Ago, by T. C. Elliott in The Quarterly of the Oregon Historical Society Vol. 19, No. 3 – Sep., 1918).

Leaving his vessel at anchor outside the bar Captain Biddle “proceeded in with three boats well armed and manned with more than fifty officers and seamen.” The party landed inside Cape Disappointment on the quiet shore of Baker’s Bay near where the buildings of Fort Canby are now located, and there went through the ceremonies of waving and saluting the American flag (with three cheers), of turning up a sod of earth and nailing a leaden tablet to a tree. Meantime the guns of the sloop roared in salute, the few Chinook Indians who happened to be present looked on in wonder, and the fur traders at Fort George fifteen miles away were suddenly awakened from the monotony of their secluded life.

Under the terms of the Treaty of Ghent (1814) all conditions reverted to status ante bellum, which the Americans interpreted as meaning their claims to the Oregon Country were intact, despite Great Britain’s war-time takeover of Fort Astoria, which they had renamed Fort George. Captain Biddle’s mission was meant to underline the American point of view.