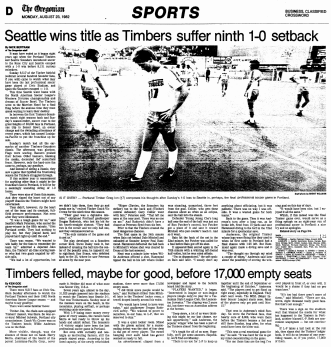 The North American Soccer League Portland Timbers thrived in the second half of the 70s, but like the league, which crumbled in the early 80s, the Timbers’ franchise also lost its luster. While the league limped along through 1984, the Timbers would play their last NASL match on Sunday, August 22, 1982.

That last match was not so well attended as those in the early days, as Ken Goe reported in The Oregonian on August 23, 1982.

There were 9,517 fans at Civic Stadium Sunday afternoon to watch the Portland Timbers end their 1982 North American Soccer League season – and maybe to say goodbye.

There were some familiar faces:

Timber Jim, the chain saw-equipped Timbers’ mascot, was there. So was ever-loyal Mildred Schwab, Portland city commissioner. Coach Vic Crowe was on the Timbers bench; Willie Anderson was on the field.

More visible, though, was the absence of those not on hand. Harry Merlo, chairman of the board of the parent Louisiana-Pacific Corp., never made it. Neither did most of what once was Soccer City, U.S.A.

Seven years ago, almost to the day, 31,523 people jammed into the stadium to watch the Timbers beat Seattle 2-1. That was Timbermania. Sunday most of the maniacs were on the beach, in the mountains, playing softball, or perhaps watching cable television.