The state fair, a street fair, Sunday Parkways, movies in the park, beer events, and more – looks like a great weekend!

“Celebrating the city with the most breweries in the world, PDX Beer Week is a great way to explore all that Portland has to offer within its unique craft beer community.” [more]

Competitions this year include 4-H of course, along with categories such as fine art, farm and garden, photography, floral, creative living, and grill offs. And of course there will be horse shows, and exhibits of livestock and the best part: small animals. [more]

The 20th Festa Italiana turns Pioneer Courthouse Square into a piazza Thursday through Saturday, August 25 through 27, 2011.

This is one of my favorite Portland festivals, and not just because of the strolling accordionists. Arrive early to secure a table in the beer and wine garden! [more]

There is a pernicious assumption among beer fans that in order to bristle with flavor, a beer must be strong. The notion has led to rampant escalation in alcohol content—the steroid era of good beers. But it doesn’t have to be so. Throughout history, brewers have regularly packed intense flavors into small beers. [more]

There is a tradition in Sweden that at the end of Summer, in the month of August, they celebrate by having an enormous crawfish party. This year marks our 1st Summer Party Blowout with respect to this age-old occurrence, featuring food and merriment in the Scandinavian style. [more]

Spend your Sunday morning and afternoon (11am to 4pm) winding your way on bike or foot through mostly residential streets free of car traffic, from one park to the next. The 2-way, 6.2-mile Southeast Portland Sunday Parkways route connects Laurelhurst, Colonel Summers and Ivon Parks, plus the Hawthorne Street Fair. [more] 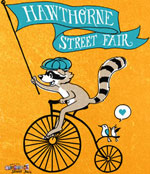 For the third year in a row the fair coincides with the Southeast Portland Sunday Parkways, which intersects with Hawthorne at 32nd and 45th. Most of the street fair activities take place between 12th and 51st (take a look at the map). Clusters of arts, crafts, and food vendors pepper the side streets, sidewalks, and adjacent parking lots. [more]

And for even more weekend events and activities, check out the Dave Knows Calendar, and visit Blogging Portland on the Cheap, PDX Pipeline, and Oregon Events at OregonLive.com.