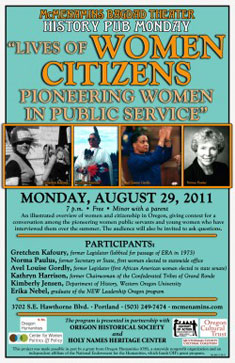 Historian Kimberly Jensen will provide an illustrated overview of women and citizenship in Oregon, giving context for a conversation among the pioneering women public servants and young women who have interviewed them over the summer. Reflecting on their interviews, the panel will engage in conversation about the history and future of women in Oregon politics. They will address questions such as: What constitute “women’s issues” in politics? What is the definition of a “feminist” politician? What defines a citizen? Is that definition different for men and women, and should it be? How are these issues different for women of different ethnic backgrounds? The audience will also be invited to ask questions.

Other participants include Gretchen Kafoury, former legislator; Norma Paulus, former Secretary of State of Oregon; Avel Louise Gordly, former legislator; and Kathryn Harrison, former Chairwoman of the Confederated Tribes of Grand Ronde. The program is presented by Century of Action and the Center for Women, Politica and Policy at Portland State University.

Doors open at 6pm, show starts at 7pm. Admission is free, and minors are welcome with a parent or guardian.