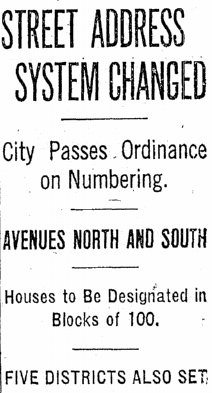 The Great Renumbering is what the change came to be called. The Oregonian‘s John Terry examined the rational in an article last week: Lost in Portland? Well, before 1931, things were a whole lot worse.

The invention of a codified, streamlined street naming and numbering system surely gladdened the hearts of mail carriers, delivery drivers, police, firefighters, taxi drivers and just plain folks who, even with a plainly specified address, could find themselves at the wrong building on the wrong street in the wrong part of town.

Even more cause for elation was the conquest of the city fathers’ longtime reticence. Despite regular pleas from those who found making their way around town a real pain, they had, for more than 30 years, refused to overturn the status quo.

The problem stemmed from the city’s expansion in the late 19th century. Portland, of course, began in the late 1840s as a measly few blocks on the west side of the Willamette River. It wasn’t long before it began embracing land north and south along the river and west toward the hills.

Then it jumped the river to claim East Portland, Albina and St. Johns, plus neighborhoods in between and beyond. The upshot, said the late Eugene E. Snyder in “Portland Names and Neighborhoods: Their Historic Origins” was that “in the newly consolidated Portland of 1891 there were twelve “A” streets, twelve “B” streets, twelve “First” streets, nine “Cedar” streets and so on.”

The Great Renumbering was phased in over two years and gave us the standardized addressing system we know today: 100 numbers per block, north-south streets (mostly numbered) became avenues, and the five “quadrants” were established.