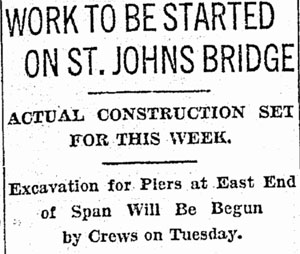 With preliminary phases practically complete, actual construction of the new St. Johns suspension bridge will get under way this week. Excavation for the piers at the east end of the bridge will start Tuesday. . .

Workmen for the Gilpin Construction company, which has the contract for the substructure of the bridge, have been assembling equipment for the start of operations on the east bank of the river. J. F. Gilpin, president of the firm, will supervise the work. Between 25 and 50 men will be employed now and possibly another 50 as the work progresses. The Pacific Bridge company, which has the subcontract for the main piers, will also start work in a few days.

Beginning a month before the stock market crash of October, 1929, the bridge construction provided employment for scores of local residents through the start of the Great Depression.

The St. Johns Bridge was officially dedicated on June 13, 1931 during the Rose Festival. When it opened it was the longest suspension bridge west of Detroit. One of it piers, at a height of 163 feet, was the tallest reinforced concrete pier in the world. The 205′ underclearance above navigable water at the central span was a record as well.