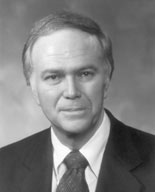 After serving 26 years in the U.S. Senate, Senator Bob Packwood announced his resignation on September 7, 1995 (The Oregonian, 8 September 1995).

The day before saw the Senate ethics committee vote 6-0 to recommend his expulsion.

The chain of events that lead to his resignation began on November 22, 1992, less than three weeks after he won reelection to his fifth term in the Senate. The Washington Post published a story detailing accusations, from ten women, of sexual misconduct by the senator.

His resignation became official on October 1, 1995.