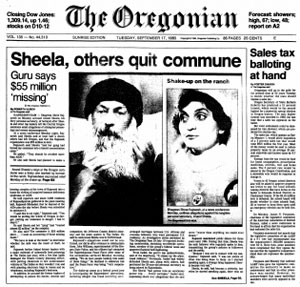 Rajneesh called a press conference on September 16 and accused Sheela and her cohorts of turning his commune into a fascist concentration camp (The Oregonian, 17 September 1985). He claimed she had planned to open a housing complex near the commune to house AIDS victims (sadly a scary thing to many people at the time), that she may have stolen $55 million from the religious group, that she was involved in the intentional salmonella poisoning of residents of The Dalles and a fire at the Wasco County planning office, that she had bugged rooms and telephones at the commune, and had attempted to poison his doctor, dentist and companion; the Jefferson County district attorney; and the water system in The Dalles.

Several of the allegations were true, and Sheela was extradited to Oregon from West Germany on October 28, 1985, and sentenced to ten years in prison. Eventually Rajneesh attempted to flee too, and was arrested and tried on immigration fraud charges.