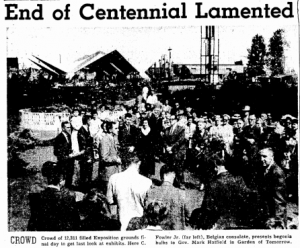 The last official act was held at midnight on the 100th day (the expo opened on June 10), when Northwest Natural Gas’ “pyrohedron,” a huge natural gas flame, was extinguished by gas company employees Ed Hanson and Henry Wolf (The Oregonian, 18 September 1959)

Also on the last day Governor Mark Hatfield and his wife appeared at the International Garden of Tomorrow, where Centennial commissioner Janet Baumhover presented them with roses from the garden to be transplanted at the Hatfield’s Salem home.

Tragically, the Hofbrau, for the first and only time during the 100 days, ran out of beer at 20 minutes to 11pm.