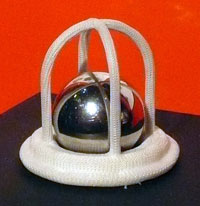 On September 21, 1960 a team lead by Dr. Albert Starr performed the first successful human mitral valve replacement surgery in Portland at the University of Oregon Medical School, which is now known as Oregon Health & Science University.

52 year old Philip Amundson of Spokane, Washington was the patient who received that first “caged-ball” artificial valve, which had been developed by Starr and Lowell Edwards (The Oregonian, 13 October 1960).

The artificial valve was an early success in the medical device industry and paved the way for countless innovations in the field of cardiology worldwide.