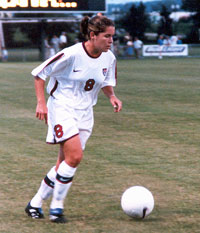 American soccer great Shannon MacMillan, who played collegiately at the University of Portland, was inducted into the Oregon Sports Hall of Fame on September 25, 2007.

MacMillan won the Hermann Award as the top college soccer player in 1995, was a four time All-American, and was the Division I national scoring leader in 1993. She won an Olympic gold medal in 1996, and silver in 1999. She played too on the 1999 World Cup winning team, amongst numerous other honors.

In 2006 she retired from international soccer.