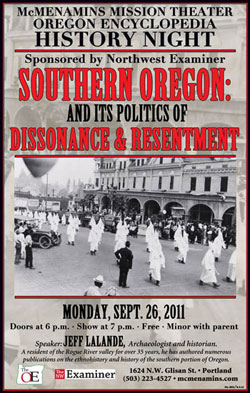 How Southern Oregon Got Its Ornery Streak: The Politics of Dissonance and Resentment is the topic of the Oregon Encyclopedia History Talk on Monday, September 26, 2011 at the Mission Theater (1624 NW Glisan).

“What’s the matter with Southern Oregon?” Why are residents of the Portland area so often surprised—even shocked—by the politics to the south? Dating from before statehood to the present day, Southern Oregon’s conservative-populist politics have made for a distinctive and often “ornery” reputation. Jeff LaLande’s illustrated talk will explore the reasons for this tradition—from the region’s pro-Southern attitudes during the Civil War, its support for populist third parties (including the 1920s Ku Klux Klan), to a dramatic political insurrection during the Great Depression and the State of Jefferson “secession” movement of the 1940s.

Presenter Dr. Jeff LaLande is an archaeologist, author, and historian. He has been a resident of the Rogue River valley for over 35 years.

Doors open at 6pm, presentation starts at 7pm. Entrance is free! Minors welcome if accompanied by parent or guardian.