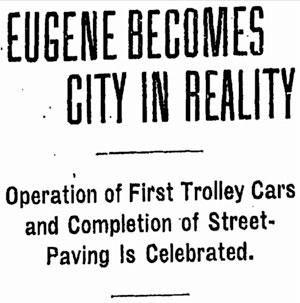 The debut of Eugene’s first electrified streetcar line on September 26, 1907 marked a decided epoch in the transition of Eugene, the town, toward Eugene, the city. (Morning Oregonian, 27 September 1907).

When the train arrived at 3 o’clock bearing [boosters and businessmen] Tom Richardson and A. Welch, the Eugene band and citizens with tin horns and leather lungs broke forth in greeting. The visitors were put onto the new streetcars and the first trip on the city electric line was made, the cars running beyond the University of Oregon campus into Fairmount.

The cars were decorated in the University colors and were packed with citizens, who cheered as the cars moved along Willamette street. Hundreds of people along street joined the cheering until the cars had passed out of view. Those who did not ride the first time rode later, and the motormen were kept at work until late in the evening.

By 1912 Eugene had one of the best small-city streetcar systems in the country, boasting four trolley lines with eighteen miles of track connecting Blair, College Crest, Fairmount, and Springfield. Over two dozen conductors, motormen, and shop workers kept the lines running from 6am until midnight. Even so, conversion to bus operation began with the Springfield Line in 1926. The last trolley in Eugene ran a year later on October 15, 1927 (The Oregon Encyclodpedia).