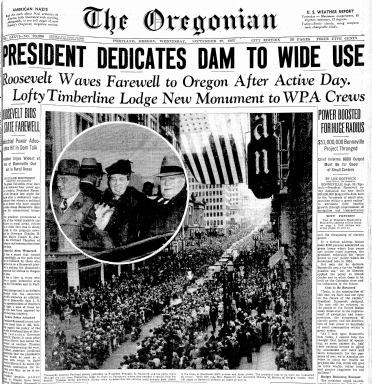 President Franklin D. Roosevelt made a whirlwind trip through Oregon on September 28, 1937 (The Oregonian, 28 September 1937).

His itinerary began with an 8am stop at the new $45 million Bonneville Dam, where his dedicatory speech was broadcast on radio nationwide.

By auto he and his entourage proceeded to the Timberline Lodge on Mount Hood where he first enjoyed lunch before speaking, and dedicating the lodge, at 1:30pm.

After the speech the presidential caravan headed to Portland via the Mount Hood Highway, where for 45 minutes he slowly paraded through town, waving. Then he was off to Vancouver to catch a 5pm train for Seattle.