The big deal this weekend is the 60th annual Greek Festival, but Occidental Brewing and Prost are still Oktoberfesting, and a pair of film festivals and a juggling event round out a glorious weekend. 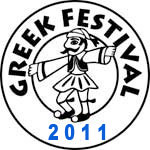 The unnameable fear and cosmic horror of the H.P. Lovecraft Film Festival returns to the Hollywood Theater (4122 NE Sandy) Friday and Saturday, September 30 and October 1, 2011.

“The H.P. Lovecraft Film Festival promotes the works of H.P. Lovecraft, literary horror, and weird tales through the cinematic adaptations by professional and amateur filmmakers.” [more]

The Portland Juggling Festival is one of the largest regional juggling festivals in the United States, with jugglers from around the world and down the street joining together to share their knowledge and show their skills. [more]

“We will have 1L Boots and Mugs for sale at the door, Live Music, Traditional German Dancing, Masskrugstemmen Competition, Food, and of course plenty of Cold Bier!” [more]

Celebrate Oktoberfest in St. Johns with Occidental Brewing Co. this Saturday, October 1 from noon until 10.

“Enjoy German cuisine cooked up by the neighboring Cathedral Park Kitchen, and of course there will be beer! Occidental’s 2011 Festbier will debut at the festival, and their regular lineup of German-style beers will be available as well.” [more]