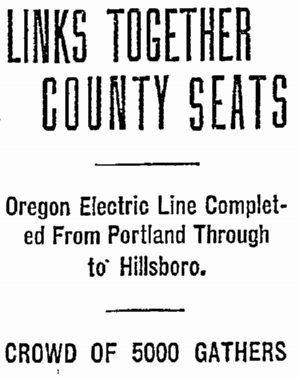 Portland and Hillsboro were first linked by electric rail on September 30, 1908, when the Oregon Electric Railway Company’s new line opened to an enthusiastic crowd (Morning Oregonian, 1 October 1908). The line, which would extend 26 miles when it reached Forest Grove a few days later, was the first electric passenger line in Washington County.

The trolley cars were warmly welcomed by the people of Hillsboro and Washington County, who carried out an elaborate reception . . . Officials of the Oregon Electric left the city for Hillsboro on a special car at 1 o’clock yesterday afternoon, headed by General Superintendent Coolidge. As the special reached Hillsboro, it found an immense crowd of people to greet it, and the warmth of the welcome of the new trolley line was unmistakable.

You know how the story goes, of course. Eventually reliable roads and cheap gas; automobiles, trucks, and buses took over. Passenger service to Forest Grove ended in 1932.

Almost exactly 90 year after the debut of electric rail to Hillsboro, the service would be reborn when the Westside Max, which actually utilizes former Oregon Electric Railway right-of-way between Beaverton Central and downtown Hillsboro, opened on September 12, 1998.