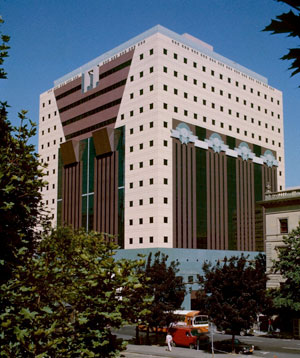 With most of the fanfare that traditionally accompanies such civic celebrations – only the rain was missing – Portland residents and officials gathered on Southwest Fifth Avenue Saturday to dedicate their colorful new office building.

The Portland Building was declared officially open by Mayor Frank Ivancie, who called the $24.5 million, 15-story structure “a bright star on our beautiful city’s skyline.”

Entertainment at the dedication was provided by the Grant High School Royal Blues and the Portland Civic Band, who offered the debut performance of “Portlandia,” a Steven Smith composition written as a tribute to the new building.*

As the crowd sang “God Bless America” architect Michael Graves and the mayor released a cluster of cream-colored weather balloons carrying a ribbon-bedecked wreath to commemorate the ceremony (a gaudy tribute which Portland architect Pietro Belluschi, who once described the building as an “oversized beribboned Christmas package,” might have found appropriate).

The Raymond Kaskey designed Portlandia statue was installed in 1985.

*I can find no other reference to Steven Smith’s composition Portlandia anywhere on the internet or The Oregonian archives. Interestingly another musician, Marc C. Miller, composed another song called Portlandia, which was officially declared the Portland city song in 1989.