Not a bad lineup for a decidedly Fall weekend – festivals this weekend come in several varieties: literary, cheese, beer, and film. Also a free film screening for history buffs, and more!

In observation of Domestic Violence Awareness Month and to honor the heroism of survivors, the Bradley Angle House is teaming up with the fabulous performers of Darcelle XV (208 NW 3rd) for a special one-night only show: Super!Drag.

“Take a bunch of bearded, paranoid men (including Kurt Russell,) stick em all in Antarctica and then hide a shapeshifting alien inside of a cute little dog.” [more] 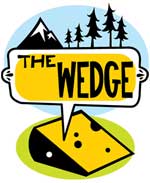 This farmer’s market-style event is organized by the Oregon Cheese Guild to “showcase artisan, specialty, and farmstead cheesemakers from throughout the Northwest.” [more]

Hop heads will be in heaven – this fest features dozens of delicious locally brewed beers spiced up with freshly picked hops (scroll down on this page for the full beer list). [more]

Lens on the Community: Riches of a City

Public History Graduates (PHig) debuts the Lens on the Community program with a screening of Riches of a City, at 2pm this Sunday, October 9, 2011 at 5th Avenue Cinema (510 SW Hall).

“Riches of a City (1975). . . documents the development of the Skidmore District and recounts the struggle to bring this downtown Portland neighborhood into the modern era while preserving its cultural and historical significance.” [more]