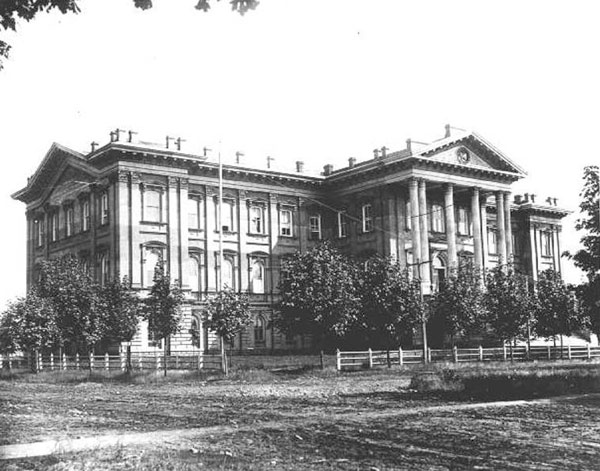 Though Oregon City was the Oregon Territory’s first capital, Salem has been the designated location since 1850 (except for a brief and controversial relocation to Corvallis in 1855). The first Salem capitol building was built in 1854 . . . and burnt down in December, 1855.

A new capitol was not completed until 1876 (the legislature met instead at the Holman Building at Ferry and Commercial Streets in Salem for the intervening two decades).

The corner stone of that second capitol building was laid, with impressive Masonic ceremonies by Most Worthy Grand Master of Masons in Oregon, T. McF. Patton on October 8, 1873 (The Sunday Oregonian, 15 January 1893).

In the large procession on that occasion there were the East Portland Cornet band, Portland City band and the celebrated Aurora German band . . . The address was delivered by Governor S. F. Chadwick, then secretary of state. This address received much favor as a fitting immigration document for which it was extensively used. This was a great day in Salem, and thousands of people were in attendance from different parts of the state.

Sealed in the cornerstone was a copy of the December 25, 1870 London Weekly Times, a February 11, 1723 copy of the Benjamin Franklin published New England Courant, a copy of the New York Herald from May 6, 1835, and a copy of the day’s The Oregonian.

The Renaissance style building patterned after the U.S. Capitol burnt down on April 25, 1935. The four story Modern Greek-style capitol we know today was dedicated on October 1, 1938.