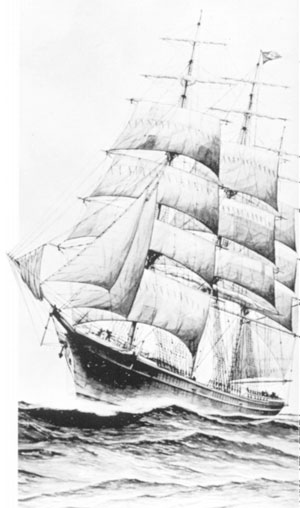 The only true clipper ship built on the West Coast, the Western Shore, was launched from Asa M. Simpson‘s shipyard in North Bend on October 10, 1874.

Captain Asa Meade Simpson and his brother, Captain Robert W. Simpson, designed the ship and had a 50 percent ownership interest in it. In 1874, master shipbuilder John Kruse built the clipper at the Simpson shipyard in North Bend on Coos Bay at a cost of $80,000.

The Western Shore had a capacity of 1,188 tons. She was 184 feet long on keel, 204 feet overall. She was 133 feet high, with a 43 foot beam. And the three-masted, square-rigged Western Shore, built of Douglas-fir and Port Orford cedar and sporting cabins paneled in myrtlewood, laurel, and mahogany, was no run-of-the-mill ship, she was the fastest ship of her time (Morning Oregonian, 15 May 1875).

It is with a pardonable degree of pride that we publish elsewhere the fact that a vessel built in Oregon, the Western Shore, of Coos Bay, has made the quickest run of the season from San Francisco to Liverpool with a cargo of wheat. While the winds may have favored her, we have no doubt the expressions of admiration which her build and model called forth from those who saw her and who knew the good sailing qualities of a vessel, when she was first launched, that her construction and style of rigging helps to account for the fact that she outstripped the crack sailers of several nations, which have left this coast the past season. The San Franciscans wagered quite large sums of money on the race between the Three Brothers and The British King, tow ships which sailed from their city to Liverpool last winter, the fastest of which consumed over 150 dys in the voyage, while the Western Shore went past them both with her Oregon colors afloat and moored to the Liverpool docks in one hundred and four days. We are only sorry that the Western Shore did not carry a cargo of the best wheat that could be found in our state to add to the very considerable attention which she will doubtless receive on account of her quick trip, as it would have given a more complete idea of the great resources of this country. However, as it is, we are inclined to give one hurrah for the Oregon ship.

She set several speed records that stand to this day, including a 97 day trip from Astoria to Liverpool, and 110 days from San Francisco to the same port. In 1875 she left San Francisco behind the steamer Oriflame and arrived in Astoria two days later, two and a half hours ahead of the steamer.

Her glory was short lived, however, as her reportedly drunk captain, Captain Hotchkiss, ran her aground and sank her on Duxbury Reef, on July 9, 1878. It was the end of an era anyway. Sailing ships were rapidly being displaced by steamships, and no other clippers were ever built in Oregon.