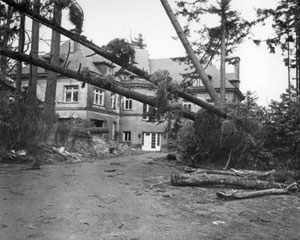 On Columbus Day, 1962, the most devastating wind storm in recorded history to hit the Pacific Northwest, known as the “Big Blow,” caused major destruction in northern California, Oregon, Washington, and British Columbia. The extratropical cyclone, which began as Typhoon Freda, was the greatest natural disaster to strike the West Coast in more than half a century.

The then privately owned, and up for sale, Pittock Mansion sustained significant damage during the storm. A fundraising effort by concerned citizens spurred the City of Portland to purchase the mansion in 1964 (for $225,000!). It was restored and in 1965 the historic house opened as the museum we know it as now.

Learn about the impact of the 1962 Columbus Day Storm on Pittock Mansion and Portland from 11:00am to 4:00pm. OMSI representatives will be on hand to demonstrate a small tornado chamber, a weather balloon, and a Van de Graaff generator. They will also lead hands-on projects to create a wind vane and a rain gauge.