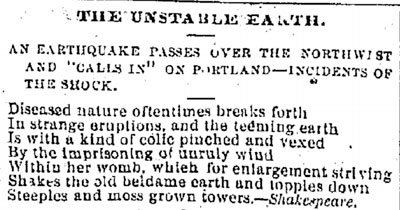 Yesterday afternoon at seven minutes before two o’clock; a distinct earth shock, followed in a few seconds by another and severer one, passed over the city from north to south. It was not, as is usually the case, preceded by premonitory rumblings, but came from terrifying suddenness. The scene on the principal streets, as the people became conscious of the cause of the agitation, was one of wildest confusion and, for a moment, of terror. From houses and stores, people with white, scared faces, rushed into the streets, cigars dropped from the mouths of smokers, horses snorted and dogs whined with fear, the air, as well as the earth, seemed filled with a mysterious and awful power – the streets seemed turned into a mad carnival of fear. This was for one moment; the next, everybody was trying to convince everybody else that he “wasn’t a bit scared.”

Several small children were severely bruised at the North school as they rushed pell-mell down stairs during the panic. Windows shattered at the Central and High schools. Several houses suffered broken windows and knocked down chimneys.

The tremor, estimated at intensity VII, was felt as far away as Astoria.