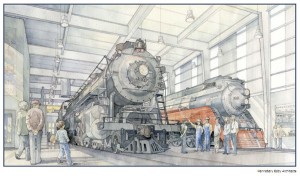 The locomotives of Portland will soon have a new home.

Dignitaries including Portland Parks Commissioner Nick Fish, former Commissioner Mike Lindberg, and Congressman Earl Blumenauer were present this morning for the groundbreaking for the Oregon Enginehouse and Rail Heritage Center.

This new steel building will combine modern technology with traditional design elements in the 19,200 square foot Enginehouse. The Enginehouse will be the new home for Portland’s three heritage steam engines: the Southern Pacific 4449; the Spokane Portland and Seattle 700; and the Oregon Railway and Navigation 197. These machines were the engines that fueled the economy to make Portland what it is today.

The locomotives will have to be relocated before the planned 2012 expansion of the Union Pacific’s Brooklyn Yard, where the historic locomotives have been stored, out of public viewing, up until now. Volunteers with the Oregon Rail Heritage Foundation have successfully raised over $4.5 million for the center’s construction. About a $1 million more is needed!

Opening in late summer 2012 across the street from OMSI, the new center will include a public viewing area, interpretive displays, and a gift shop. Future plan call for an expansion of the 2nd floor overlooking the shop and adding spurs that radiate from the historic Brooklyn turntable outside for displaying vintage cars.