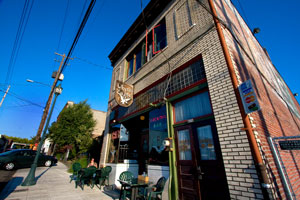 For decades the White Eagle Saloon in North Portland has been a favorite blues & rock ‘n’ roll joint. It also has a reputation for being one of the most haunted spots in the city, drawing many ghost hunters and curiosity seekers, especially this time of year. But this venerable establishment, which dates to 1905, began its life with a much different mission: an important hub for Polish immigrants. Meetings to organize the first Polish Catholic Church on the Pacific Coast as well as Portland’s Polish Library Hall, which turns 100 this year, were held at the White Eagle.

The presenter is the McMenamins empire’s own historian, Tim Hills.

Join event co-sponsors Oregon Historical Society and Holy Names Heritage Center at 7pm Monday for a beer and history! Admission is free and this event is all ages. Canned food donations will be accepted for the Oregon Food Bank.