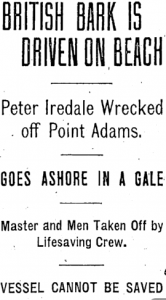 The British barque Peter Iredale, bound for Portland, Oregon, had an exceptionally pleasant trip up the coast from Salinas Cruz, Mexico, until the early morning hours of October 25, 1906 (Morning Oregonian, 26 October 1906). At 2am Captain Lawrence spotted the Tillamook Rock Lighthouse and gave orders to make sail and head for the mouth of the Columbia River. At 6am, with breakers ahead, all hands were called to the deck and the crew attempted to work the Peter Iredale off shore. But strong southerly gales, the current, and the rising tide foiled that plan. Before 8am she struck the sands with her port bow.

ASTORIA, Or., Oct. 25 – (Special.) – With three of her masts gone and lying broadside high on the beach, the big four-masted British bark Peter Iredale is wrecked in the breakers about three-quarters of a mile below the old Point Adams lighthouse, south of the Columbia River jetty, with every indication that her bones will bleach in the sands, although there is a bare possibility that she may be saved.

The bark went ashore during a strong gale about 7:30 o’clock this morning. Her masts went overboard soon afterwards. All on board were rescued by the life-saving crew. Captain Lawrence, master of the bark, and his officers remained by the vessel all day. Tonight most of them are at the Point Adams life-saving station. Twenty members of the crew were brought to this city this evening, all safe and sound.

The wreck quickly became a tourist attraction, and continues to be to this day. Her bones are still lodged firmly in the sand at Fort Stevens State Park.