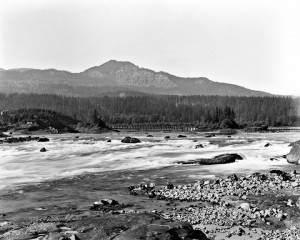 Intrepid explorers Lewis and Clark faced one of their toughest challenges when, on October 22, 1805, they reach Celilo Falls. The falls were the beginning of a 55 mile stretch of rapids, falls, and generally dangerous river conditions.

It took the explorers two days to portage several miles around Celilo Fall’s 38 foot drop. At The Dalles the non-swimmers portaged, and the foolhardy swimmers decided to shoot the rapids in their canoes . . . and they survived!

Finally, on October 31, 1805, the expedition reached the grand Shute, later known as the Cascade Rapids,

. . . final barrier to the broad, swift, flat waters of the lower Columbia. What Lewis and Clark called “the great Shute” was a four-mile stretch where the river ran “with great velocity fo[a]ming & boiling in a most horriable manner” (Oct. 31, 1805). ) The party cleared the last of the Cascades on November 2, at times portaging along a well-used Indian trail.