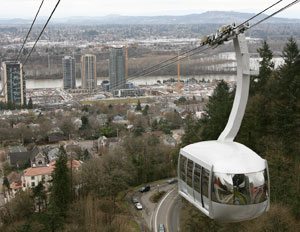 Two weeks late, the pair of Swiss-made tram cars destined for use on the Portland Aerial Tram finally arrived in Portland on October 29, 2006.

The two tram cars that will be used to shuttle people back and forth from Oregon Health and Science University to the South Waterfront arrived on a large ship at the Port of Portland’s Terminal Six Sunday afternoon.

The journey for the cars started in Switzerland where they were fabricated.

The cars were originally scheduled to arrive in Portland the week of October 16th. Tram Project Manager, Rob Barnard, told KGW “The ship that they were on didn’t have a lot of freight for the Portland area. It was running late and they diverted to Canada where the majority of their shipment was.”

The cars were built by Bern, Switzerland based Gangloff Cabins.

The Portland Aerial tram officially opened to the public on January 27, 2007. 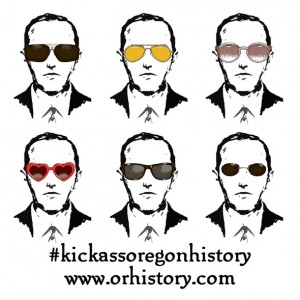 DB Cooper Nite will (honor? celebrate? recognise? condemn?) note the 40th anniversary of the only unsolved skyjacking in United States Aviation History. On November 24, 1971, a man in a dark suit and sunglasses hijacked a big ol’ jet airliner leaving Portland, drank a few bourbon and 7s, chain smoked some Raleigh cigarettes, obtained $200,000 in twenty dollar bills, and parachuted out of the rear of the plane at 10,000 feet… never to be heard from again. Rock and Roll!

Setting the scene of one of the Pacific Northwest’s most memorable and iconic crimes will be historians Katy Barber, Matt Love, OrHistory.com‘s Doug Kenck Crispin, and twitter legend @ancientportland! Enjoy DB Cooper drink specials while listening to live musical performances by Jarad Miles and Oh Darling.

AND… In support of this extraordinary, once every forty years event, Kick Ass Oregon History will feature TWO podcasts on the DB Cooper story. Episode 1 will be released on November 1st, and Episode 2 will appear on the 15th.

The elephants at the Oregon Zoo went to town today on a couple giant pumpkins. Also, Samudra is a ham. 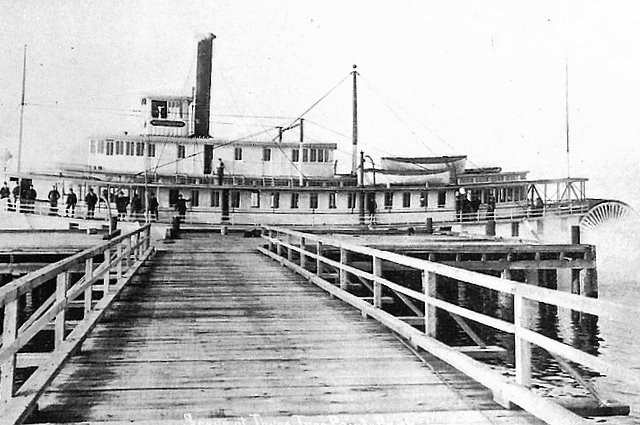 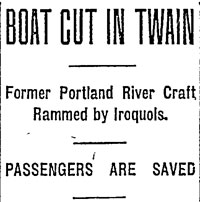 When the sternwheeler Multnomah was launched in 1885 it was one of the fastest, and certainly the finest fitted, steamer on the Willamette (Morning Oregonian, 22 May 1885). She was placed on the Portland – Oregon City route, making two trips a day. She later ran routes on the Columbia too, including excursions to Multnomah Falls (The Sunday Oregonian, 1 July 1888).

In 1889 the Multnomah was transferred to Seattle, where, thanks to her formidable speed, she quickly attained the title of “Greyhound of the Sound” (Morning Oregonian, 23 November 1889). She plied the waters of the Sound for the next two decades, but technology advanced and the now not-so-fast wooden ship ultimately came to be a mere hulk engaged in carrying freight between Olympia, Tacoma and Seattle, until the fateful night of October 28, 1911 (Morning Oregonian, 29 October 1911).

During a dense fog at midnight the steamship Iroquois outbound from Seattle with passengers for Victoria, struck the freight steamer Multnomah, from Tacoma to Seattle, and cut her in two. The Multnomah was sunk in very deep water. All the persons on board were saved. Fifteen head of cattle went down with the Multnomah. The Iroquois proceeded apparently undamaged.

According to dive reports after the accident she lies in 270 feet of water, her freight deck littered with the still tied down skeletons of the drowned farm animals

Your Portland area options for Halloween weekend 2011 are fantastic. Below is my hand-picked selection of events, plus links to where you can find even more parties and events!

Howloween and the Squishing of the Squash at the Oregon Zoo

First up the Annual Squishing of the Squash takes place on Friday, October 28 2011 at 10:30am, in the elephant area. The elephants will get to take out their frustrations on a huge pumpkin . . .

Co-presented by NW Film Center and the Alliance, the event features a unique, handpicked selection of recent shorts by emerging French directors [more]

The museum offers free admission ever fourth Friday (5pm-8pm) of the month . . . [more]

As part of Amtrak’s 40th Anniversary celebration the Amtrak Exhibit Train, a traveling display showcasing historic memorabilia, will make a stop at Portland’s Union Station on Saturday and Sunday, October 29 and 30, 2011. [more]

The Portland Farmers Market invites the public to the 2011 Great Pumpkin Event on Saturday, October 29, 2011 at the PSU market.

“The . . . annual Halloween harvest celebration featuring a pumpkin carving contest and children’s costume parade around the market at noon.” [more]

The PDX Freak Show is an annual Halloween party to celebrate folks who work hard to make Portland a vibrant film community . . . every single person who participates in the film industry on any level! [more]

“Meet some of Lone Fir’s “residents” at their graves and hear the unusual circumstances surrounding their untimely departures. Ghostly guides will also share some of the history on Lone Fir as they take you through the cemetery on a path lit with candles.” [more]

Theatre on Halloween Night Anyone?

While most Portland theatres will be dark on Halloween, Richard III will be haunting the stage for a special Halloween performance and “scaring” the living daylights out of all who stand between him and the throne. [more]

For even more Halloween weekend events and activities, check out Shadow Over Portland, and qPDX – and of course the usual suspects too: Around the Sun, Blogging Portland on the Cheap, PDX Pipeline, and Oregon Events at OregonLive.com.