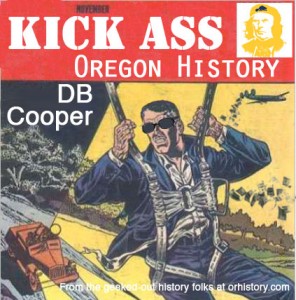 In which a man named Dan hands a girl a note, dinks a drink, grabs a bag, and jumps off a staircase. Like a boss.

Featuring interviews with Galen Cook, author Geoffrey Gray, and Ayn Sandalo Dietrich of the FBI. With the vocal talents of Ally Schutlz.

And mark November 20, 2011 on your calendar – you won’t want to miss the Kick Ass Oregon History DB Cooper Night event!