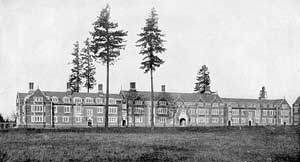 Through a program that includes Ladd and Reed’s common ventures, lost landscapes and living legacies, Ross will describe how the vision of Ladd and Reed led to the building of Portland’s strong neighborhoods, along with its civic, educational, and economic institutions – and the vibrant Downtown that we know today. We think you’ll find that the work of Ladd and Reed inspires us to continue to build and maintain high quality 21st Century communities and institutions.

Tickets are $10 for members, $18 for the general public, and pre-registration is recommended.