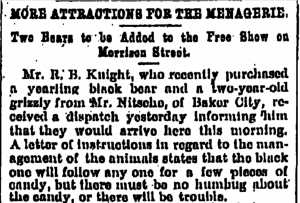 What we now know as the Oregon Zoo has its roots in a free menagerie located downtown near 2nd and Morrison, which featured eagles, owls, ducks, geese, swan, and several fish (Morning Oregonian, 12 May 1888). It was run by druggist, and exotic animal aficionado, Dr. Richard B. Knight.

On May 17, 1888 two significantly more impressive additions to the collection arrived from Baker City: a yearling black bear and a two-year-old grizzly (Morning Oregonian, 17 May 1888).

The bears, it should come as no surprise, quickly became too much to handle. At Dr. Knight’s pleading the Portland City Council agreed on November 7, 1888 to take over the care and feeding of the bears (they’d already been moved to a pair of city owned circus cages in Washington Park in June), thus giving birth to Portland’s municipal zoo.