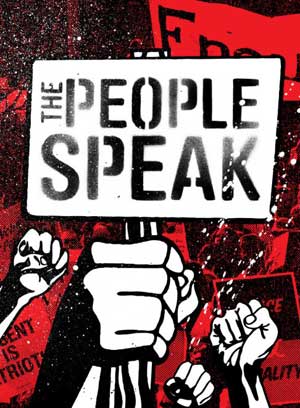 The evening begins with a silent auction at 6pm. At 8pm enjoy stand up comedy by Arlo Stone, Auggie Smith, Dwight Slade, Nato Green, and other special guests.

A screening of The People Speak, an award winning documentary based on A People’s History of the United States by Howard Zinn, starts at 10pm.

The performers’ commitment to Howard Zinn’s message makes this a labor of love. “Change doesn’t come from the top, but rather from the bottom,” Damon observes. “Without everyday citizens pushing to make a difference, there would be no America.” It is Damon who reads the Declaration of Independence, surely one of the great protest documents in history.