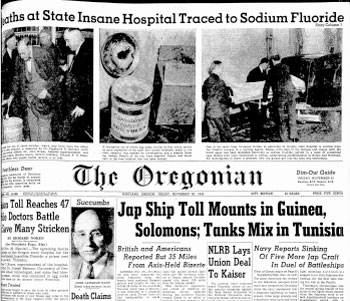 On the evening of November 18, 1942, hundreds of patients and staff members at Salem’s Oregon State Hospital for the insane sat down for a dinner that included scrambled eggs. Now normally breakfast for dinner is a special treat, but on this particular evening the eggs tasted funny. In one ward, as a matter of fact, an attendant who found the taste peculiar ordered her patients not to eat them. Everyone in that ward survived.

In the other wards, however, patients were not so fortunate:

Within five minutes of consuming [the eggs], the diners began to sicken, experiencing violent stomach cramps, vomiting, leg cramps, and respiratory paralysis. Witnesses described patients crawling on the floor, unable to sit or stand. The lips of the stricken turned blue, and some vomited blood. The first death came within an hour; by midnight, there were 32; by 4 a.m., 40. Local doctors rushed to the hospital to help out staff doctors. The hospital morgue, outfitted for two to three bodies, was overwhelmed.

Ultimately 467 people were poisoned, and 46 died. Ends up a patient trusty had brought up cockroach poison from a storage cellar, instead of the requested powdered milk. Oops.