Portland Seafood Company (9722 SE Washington) opened its doors a just few days ago in the old Newport Seafood Grill location at Mall 205. Dave Knows contributor Mike Allen was invited to a recent media preview event at the restaurant, and filed the review below (he also took all the photos!). Enjoy the review, and find more from Mike at his blog Gangster of Food, and on Twitter @GangsterOfFood. 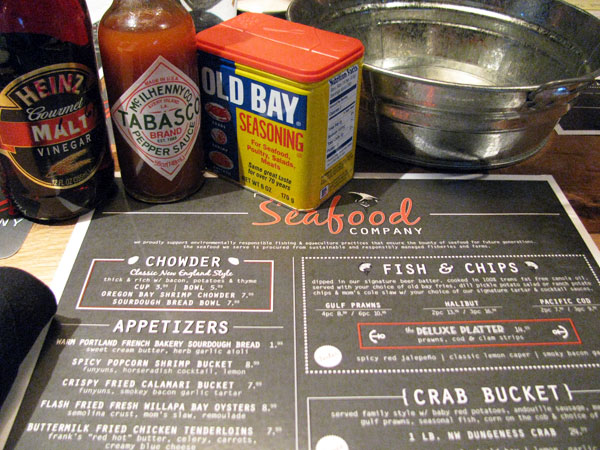 Mall 205 is as reminiscent of the Oregon coast as 82nd Avenue is evocative of Paris’s Avenue des Champs Elysées. Still, an Arc de Triomphe couldn’t hurt the place. And while it would be an unwarranted hyperbole to describe The Portland Seafood Company as a Triumph, it certainly spruces the joint up a bit. After all, who hasn’t spent a trying Saturday attempting to whittle down their overly-ambitious “Honey do” list and, after a third run to Home Depot in a futile quest to procure exactly the right widget to repair the appliance/fixture/structure, thought, “You know what would be nice? A grip of oyster shooters, a bucket of fried clams and a Ninkasi, that’s what.” Precious few I’d imagine. 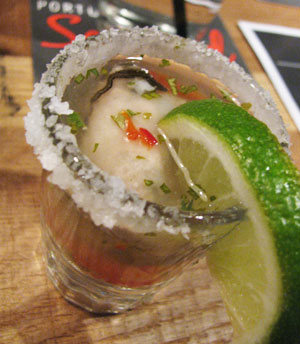 The atmosphere is a bit disjointed: faux granite and “distressed” wood surfaces under Edison bulbs and above tarnished steel bar stools, but comfy nonetheless. The service is professional, as friendly and unobtrusive as you might find at a place that serves monkfish and white asparagus and truffles, the bartender exceptionally friendly and engaged. The chef hit his mark, but we failed to dispatch the cornucopian repast.

We feasted on margarita shooters, Bloody Mary shooters, crab cocktails, oysters casino, oysters on the half shell, steamed clams, clam chowder, fried clams, crab boil, fried cod, po’ boy sliders, fried halibut, butter and garlic prawns and a whole fried rockfish served with a riot of Latin-inspired garnitures and tortillas. There was Tabasco, Old Bay and Heinz malt vinegar at the table. While I would describe nothing as a failure, the fried foods apparently hold “favorite son” status in the kitchen of Chef Brian Poor. The clams for example are East Coast Quahogs tenderized in much the same manner as a cube steak, dusted in semolina and fried. The menu claims “funyuns” as a side. Don’t be fooled like me, they just don’t want to sound too fancy by sayin’ frites á l’oignion. The fried Cod and Halibut, served as “Fish and Chips” are, truly, some of the best I’ve ever
had, even if the chips were frozen. The regular tartar sauce is perfectly tart. I cannot, however, find much nice to say about this bacon tartar sauce. The items that miss only do so in ways that snobby professional cooks and assorted gastronomic malingerers would notice anyway. Most of the fish is Pacific Northwest and considered sustainably harvested. The prices are quite reasonable; value driven is the phrase I believe they used. 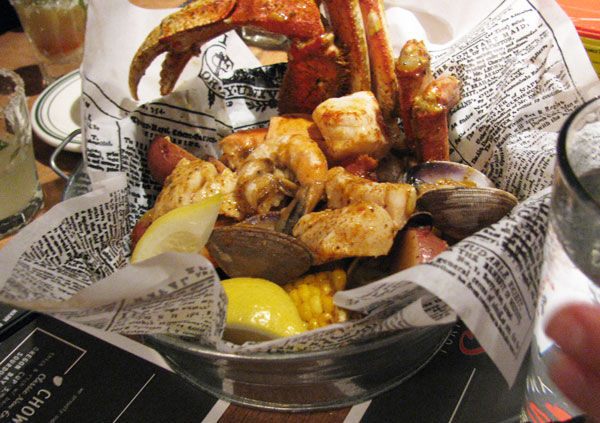 I imagine the CEO of Restaurants Unlimited has a very short (nonexistent?) list of pipes needing unblocking, lighting to be wired, or retaining walls to be erected by him personally, which is all the more credit to his vision: a person with work to do cannot afford to burden their viscerals with the beef attack of Red Robin. On my next Home Depot run (or zombie stroll through the consumerist purgatory of Target) I think I’ll skip the Burgerville drive through and go to where the company is, at the very least, lubricated.