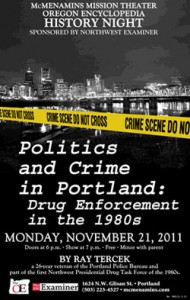 Join the Oregon Encyclopedia this Monday, November 21, 2011 for the latest installment of History Night at the Mission Theater (1624 NW Glisan): Politics and Crime in Portland: Drug Enforcement in the 1980s.

In the 1980s, the Portland Police Department uncovered a massive drug conspiracy headed by a cocaine dealer named Jose “Pepe” Chavez. Police Sergeant Ray Tercek was part of what would become one of the largest drug trafficking conspiracy investigations in the nation, and he shares his experiences breaking the conspiracy and negotiating the politics of City Hall.

This history pub is free and open to the public. Doors open at 6pm, presentation begins at 7pm.