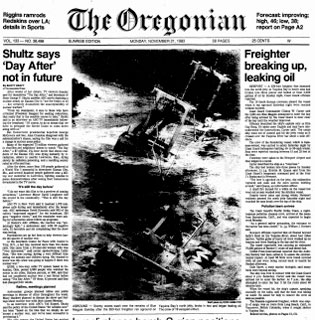 The Coast Guard had advised the freighter earlier in the evening to lay off the bay because of the rough seas, which were breaking across the bar in 14-foot, flat-sided waves. [Coast Guard Cmdr Clinton W.] Carter said a pilot could not be dispatched to guide the freighter into the bay. However, he said, the unidentified skipper “ignored our advice to stay out there.”

After the empty freighter hit the rocks all 19 crew members were lifted to safety by Coast Guard helicopters. That was the good news.

The abandoned freighter proceeded to break up into three pieces and had leaked at least 3000 gallons of oil by Sunday night (The Oregonian, 21 November 1983). Within three days 10,000 gallons of diesel fuel had escaped, and within five days another 60,000 gallons of bunker C oil had leaked out of the wreck. Ultimately hundreds of seabird deaths were attributed to the spill, which was one of the worst in Oregon history (The Oregonian, 4 February 1988).