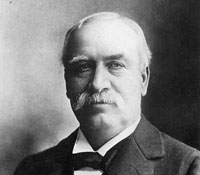 Traffic by rail was commenced yesterday between the metropolis of Oregon and the tributary empire lying east of the Cascade mountains. There was no hurrah, no confusion, no excitement. One passenger train and two freights left Albina in a plain, matter-of-fact way, as if the practice of running cars into that now prominent railroad town had been established for years.

There may have been no hurrah, but the engine of the train was gaily decorated and the headlight was covered with a portrait of Henry Villard, the owner of the Oregon Railway and Navigation Company (O.R.& N.).