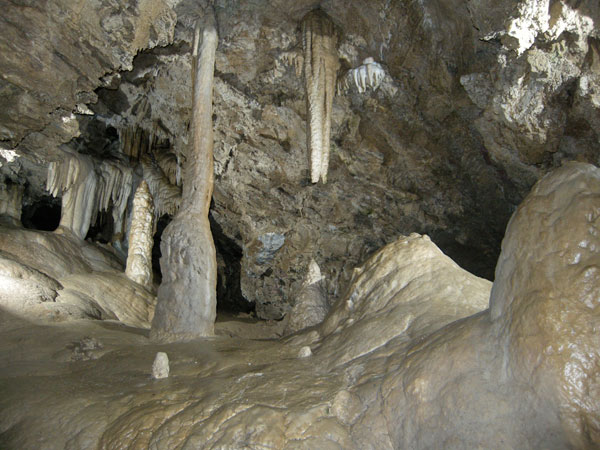 Elijah Jones Davidson was born in Illinois but grew up in Williams, Oregon, where as an adult he tried his hand at hunting, farming, and gold mining. On November 23, 1874 Elijah and his dog Bruno were out hunting in the Siskiyou Mountains when they came upon a bear. Elijah followed as Bruno chased the bear, until suddenly both creatures disappeared! It was then he noticed a stream that seemed to spring from between rocks and brush, and a large dark hole. He hesitated as he heard growling and barking emanating from the hole.

His moment of indecision came to an abrupt end when he heard a loud, high pitched yelp spring from the cavern before him. He set down his rifle…too long and cumbersome in such a small place, pulled out his knife and grabbed some matches from his pouch. He broke off a few, struck them on the rocks, and lit the way ahead of him into a dark, damp underground realm. He paused for a moment just inside the hole to let his eyes adjust to the twilight. In the enclosed space, the smell of the sulfur matches stung his nostrils, but he hardly noticed, for what lay before him held his concentration. He looked down at the floor of the small room in which he crouched, and saw the telltale sign of a bear’s having slept there. Creeping onward he heard echoes of the stream inside the walls of stone, and soon came to the water’s edge. Crawling among the rocks to avoid getting his feet soaked in the cold water, he made his way, matches and knife in hand, past uneven walls of ghostly shapes. Never had he seen such a place, but the growl of the bear brought him back to the matter at hand.

His matches burned downed to his fingertips and he pulled out the block and broke off some more. Holding them up to see as well as possible, he pushed onward, listening for dog or bear, his concentration broken now and then by the odd-looking white and tan rocks that glistened in the dancing light. He continued in this manner until he realized he was down to the last of the matches, his only source of light.

He found his way back to daylight by following the stream. The next day he returned to the cave with his brother. He had stumbled upon the Marble Halls of Oregon, now known as the Oregon Caves National Monument.