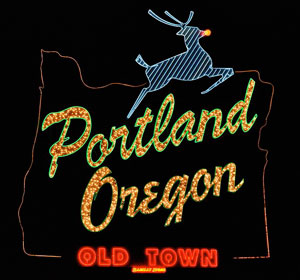 The iconic sign perched atop the White Stag building at the west end of the Burnside Bridge was purchased by the City of Portland in September of 2010. The deal with Ramsay Signs and White Stag Block LLC saved the sign from an uncertain fate, and was pushed through quickly by Commissioner Randy Leonard in order that the sign would be ready for the 2010 holiday season.

The sign advertised White Satin Sugar when it was constructed in 1941, and over the years played host to several other brands, including White Stag and Made in Oregon. After the city’s purchase the sign, retaining the Oregon outline and the deer, was changed to read Portland, Oregon.

On November 26, 2010, the day after Thanksgiving, Mayor Sam Adams and Commissioner Leonard flipped the switch that lighted the sign, now city owned, that had been dark since October. And of course, the leaping deer’s nose was lit with red.