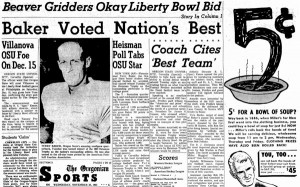 Oregon State quarterback Terry Baker received word he had won the Heisman Trophy, as the outstanding performer in the college game, on November 27, 1962 (The Oregonian, 28 November 1962).

The poll of 1,109 accredited sportswriters and broadcasters gave Baker 707 points to 618 for Stovall.

Baker is a remarkable southpaw passer and a deceptive runner with long, loping strides who has climed to second place in the all-time career total offence leaders. His 5,980 yards for three years of versity competition is topped only by Johnny Bright of Drake, a star of a dozen years ago, who gathered 5,903.

Bakers has sewed up the 1962 national total offense title with 2,276 yards and rates third among passers.

It was a basketball scholarship that brought Baker to Oregon State, who did not play football his freshman year. Baker was a three sport star at Portland’s Jefferson High School, winning state football titles with the Democrats as quarterback in 1958 and 1959. He pitched for the baseball team that won state in 1959, and as point guard he lead the Democrats to the state tournament in 1959 and 1960.