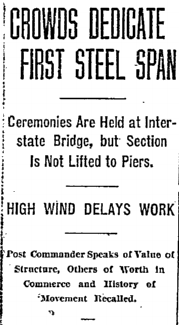 The plan, on Saturday, December 4, 1915, was to lift the first of twelve Columbia River interstate bridge spans into place, while the crowd of Chamber of Commerce members and other prominent Portland citizens cheered and listened to dry speeches (Morning Oregonian, 4 December 1915). Only part of that plan, however, was carried out that day (The Sunday Oregonian, 5 December 1915).

VANCOUVER, Wash., Dec. 4. – (Special.) – The ceremony of dedicating the first great span of steel for the Columbia River interstate bridge was held today on the Northern Pacific dock, and everything was carried out according to programme with the exception of floating out the span. When a high wind arose it was decided by the contractors, McCreary & Willard, to postpone the moving of the span until about 1 o’clock Monday afternoon.

The crowd of hundreds, however, stayed and listed to music by the Twenty-first Infantry band and speeches by enthusiastic boosters of the bridge.

On Monday, December 6, 1915 the span, resting on several barges, was steamed into place by the tugs Paloma and Hustler and connected (Morning Oregonian, 7 December 1915).